As spring dawns across the northern hemisphere and the off-roading season ramps up, AEV is excited to launch the all-new JL Borah DualSport Wheel, the company’s first beadlock wheel for JL Wrangler.  AEV designers took inspiration for this wheel from the ruggedly beautiful country surrounding the Lost River Range and Borah Peak, the tallest mountain in Idaho and one of the most prominent in the contiguous United States.

The JL Borah DualSport is a versatile wheel that can be purposed in three configurations. For daily driving customers can choose to run Borah wheels with no ring or with a Protection ring. Off-road adventurers can install the stoutly-engineered, fully-functional Beadlock Ring for wheeling in even the most extreme terrain. This wheel is designed specifically for the JL Wrangler, paying close attention to JL’s unique back spacing and center cap bore requirements.

Borah DualSport for JL measures 17” x 8.5” and is made of sturdy yet lightweight A356-T6 cast aluminum. Like all AEV wheels, the JL Borah is thoroughly tested to stringent DOT/SAE J2350 standards and is covered by AEV’s Lifetime Structural Warranty. This wheel accepts the OE lug nuts, is compatible with the Wrangler’s Tire Pressure Monitoring System (TPMS), and features a valve stem recess to protect the tire valve from being torn off or damaged by an obstacle.

The JL Borah is available now in either an Onyx or Satin Black finish – Onyx/Machined, Galaxy Black and Galaxy Black/Machined are all coming soon! The optional Beadlock Ring and Protection ring are both available in a silver or onyx finish that can easily be painted for a truly customized appearance.

New from AEV, the JL Pintler wheel! This wheel combines timeless styling with the innovative features and off-road strength that you’ve come to expect from AEV, however, this is not just another one-size-fits-all aftermarket Jeep wheel. AEV designed this wheel specifically for the JL Wrangler because despite sharing the same DNA as the JK Wrangler, many aspects of the latest generation Wrangler are quite different, so simply re-purposing a JK Jeep wheel was not the best solution. The JL Pintler’s unique offset (+25mm) works perfectly with the various OE fender flare variants and provides the optimal balance of tire clearance (5.78” backspacing), scrub radius and handling. Additionally, this wheel features a larger center cap bore for compatibility with the JL Wrangler’s OE backup camera and resized pockets for the larger factory lug nuts. Available in either an Onyx or paintable Matte Black finish. 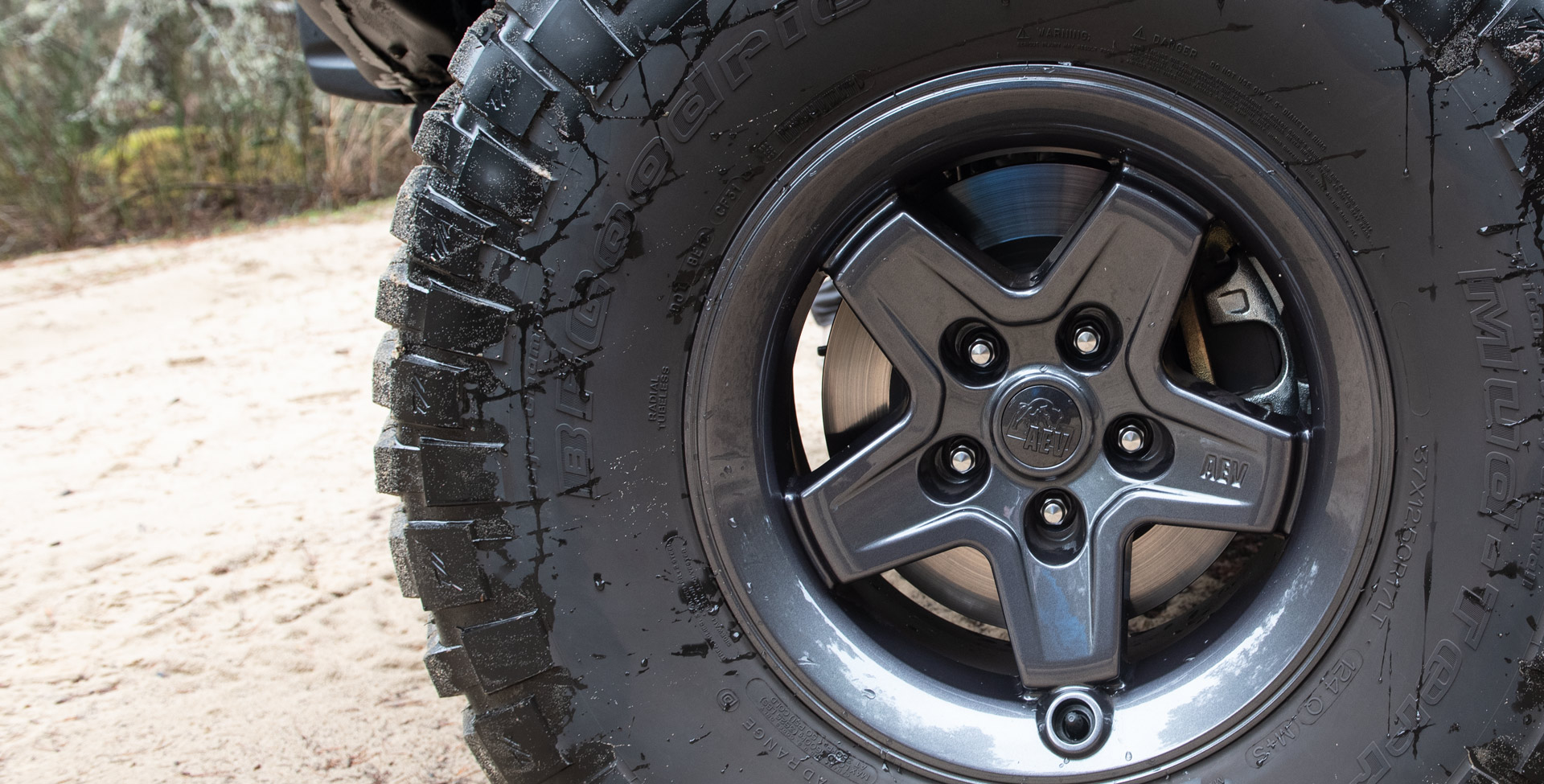 In off-road and adventure driving, it is well-known that sandy, muddy, rocky, and snow-covered terrain can be more easily traversed when the vehicle’s tires are properly deflated. This ensures that more of the tire’s surface is able to grip difficult ground, allowing for better traction and control. For this reason drivers will take time to deflate their tires before hitting the trail. And this may not be as easy—or as fast—as it sounds, especially with the larger tires often desired in off-road driving. Typically the operation is done by inserting a screwdriver or other implement into the tire’s valve stem to allow air to escape, with occasional stopping and checking to make sure proper pressure is reached. This can take a long time—several minutes per tire—time better served driving.

AEV now offers the best tool available anywhere for fast, accurate tire deflation before venturing off-road. Instead of depressing the valve stem, this corrosion resistant brass/steel Deflator Tool actually unscrews the core of the valve stem to allow air out quickly. Monitor the easy-to-read dial gauge until the desired pressure is reached and then screw the core back into the valve stem. The whole operation can be accomplished in less than two minutes per tire. As for proper tire pressure to aim for, that depends on the terrain and whether or not your wheel has a beadlock ring installed. At AEV, for our standard Salta, Savegre, Pintler, and Borah wheels, we recommend airing down to about 12-15 psi when encountering dry dirt, muddy, or rocky trails. For sand and snow, air down further to 8-10 psi.

AEV’s Borah wheel also comes with an optional Beadlock Ring, which when properly installed allows for even further deflation without the risk of popping the bead of the tire from the wheel. The 2018 Ram ProCal Module: What a difference a year makes

As many of you know, our ProCal Module is a very popular, cost effective solution for re-calibrating your Jeep Wrangler or Ram truck. The beauty of the ProCal is it’s ease of use…simply turn the ignition to run, set your dip switches and plug the ProCal Module in your vehicle’s OBDII port. Well, earlier this year we discovered that it was not going to be quite that easy for 2018 Ram truck owners.

The 2018 Ram truck (light duty and heavy duty) has a new security feature that was implemented to prevent the OBD2 diagnostic port from being used for aftermarket recalibration tools and performance tuners. However, where there is a will there is a way and we figured out a way to bypass this security feature without making any permanent modifications to your truck.

The AEV ProCal Module for 2018 Ram trucks includes a supplemental harness kit that includes everything you need to safely bypasses this new security feature, allowing you to properly recalibrate your truck, instead of having to take it to a dealership and potentially being flagged for aftermarket modifications.

Installation is plug and play and takes only minutes to complete. In fact, you can check out a quick installation video we put together {here} to see just how easy it is. These coil springs are only available as a matching set of front and rear springs in order to preserve optimal vehicle handling dynamics. The relative rate/frequency of the front coil springs vs. the rear springs is a crucial part of safe vehicle handling. Because of this, AEV increases the rate/frequency of the front springs in order to maintain an appropriate relationship with the rear springs, across the entire range of rear-biased loading. The Mesa wheel took on similar design cues as AEV’s Borah wheel for the Wrangler and adapted them for use on 1/2-ton Ram trucks. This proven design not only looks great, but is also capable of withstanding extremely heavy loads. AEV’s signature recessed valve stems provide added protection from rocks and other objects on the trail. The 18 x 8.5-inch Mesa features a Ram 1500-specific backspacing for the perfect fitment when using up to a 35 x 12.5-inch tire. This vehicle specific wheel design provides the optimal balance of tire clearance, scrub radius, and handling. Mesa smoothly integrates with the stock suspension system or with AEV’s 4” DualSport Suspension System.